Sisi’s admiration for her beloved mythical hero, Homeric Achilles, finds its utmost expression in the 19th century royal palace, surrounded by the ineffable serenity of the Corfiot landscape. Get to know the Achillion, the palace of Sisi, the “Reluctant Empress” of Austria. 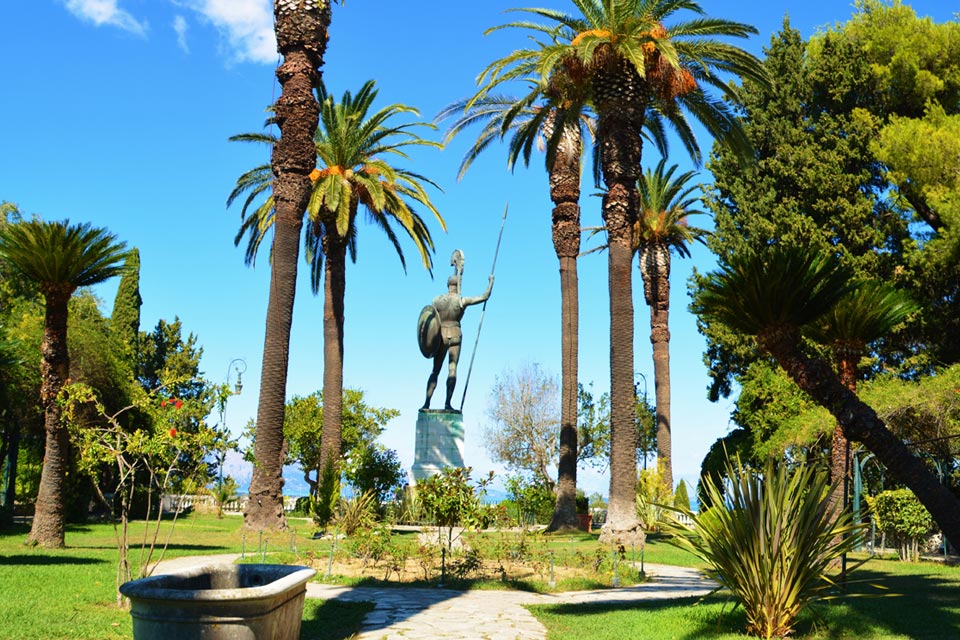 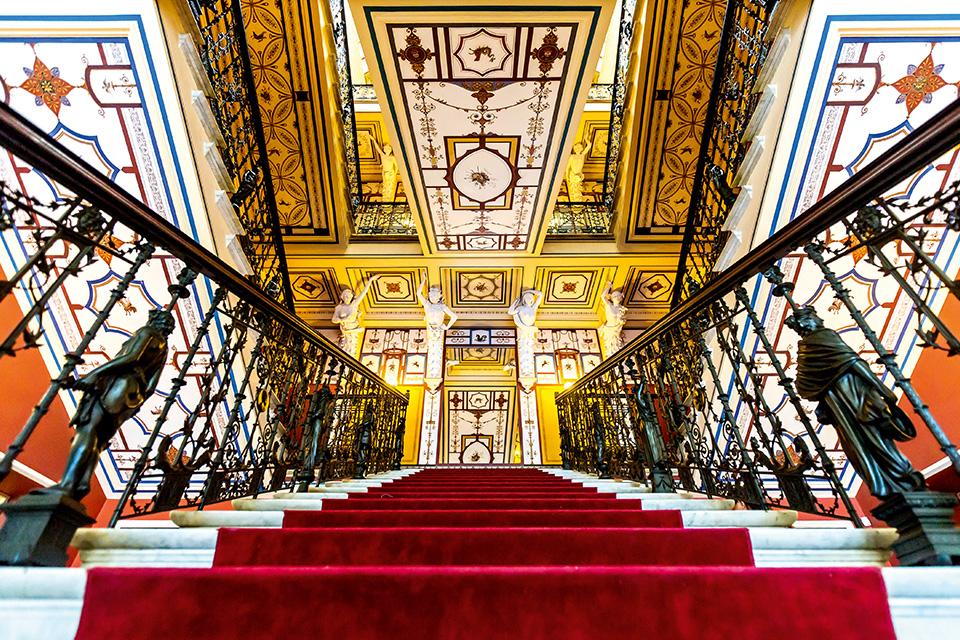 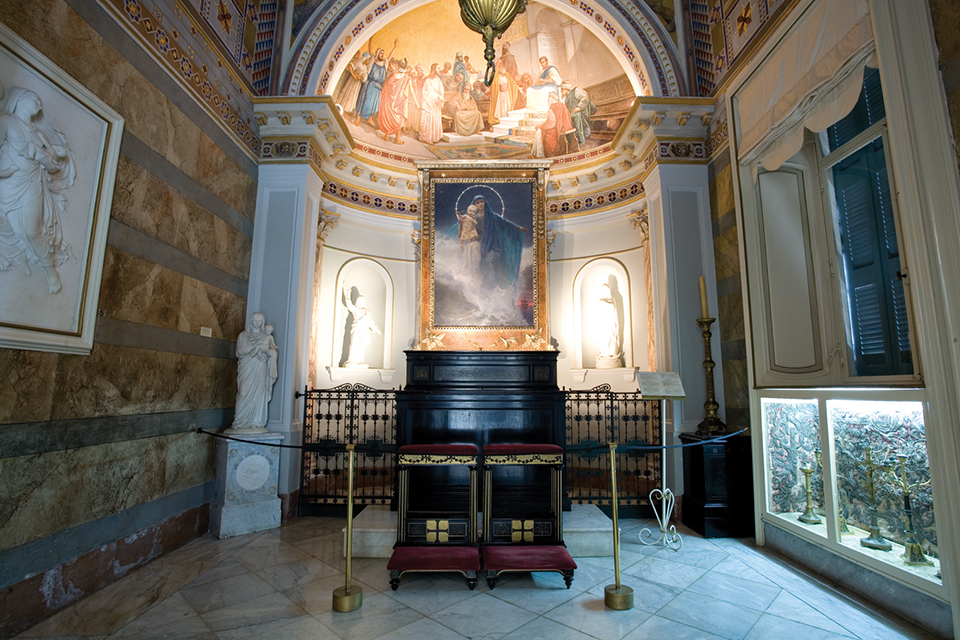 THE FORMER ROYAL MANSION OF SISI THE SAD PRINCESS AND KAISER WILHELM II IS AN ODE TO ANCIENT GREECE, FEATURING IMPOSING STATUES OF ANCIENT PHILOSOPHERS, GODS AND MYTHICAL HEROES GAZING AT THE IONIAN SEA

The breathtaking views from the lush hillside to the south of the city over the Halikiopoulos lagoon, Kanoni and Mount Pantokrator could not but captivate Elisabeth. Princess of Bavaria, Empress of Austria and, later, Queen of Hungary, also known as Sisi, Elisabeth had visited Greece several times, most frequently travelling to Corfu. Her desire to learn Greek was spurred by her trips around the country. Writer Costantine Christomanos was the man who introduced her to classical studies. As she could not stand the rigorous rules of aristocracy, Elisabeth embarked on a life of travels to escape dull court protocol. In 1889, her son, Crown Prince Archduke Rudolf, and his lover were found dead in Austria in unexplained circumstances, although it is believed that they had fallen victims of their love. Sisi’s immense sadness and fragile health prompted her doctor to recommend that she moved to a milder climate. Corfu was the obvious choice.

Elisabeth purchased the house of Greek philosopher Petros Vrailas Armenis on top of the hill in Gastouri. The palace was built in 1890-1891 by Italian architects Raffaele Caritto and Antonio Landi. The Empress, who became known as the “Reluctant Empress”, supervised the decoration of the mansion herself and retired there. The palace was named after Achilles, as an expression of her fondness for the demigod. His mother, Thetis, held the false belief that Achilles was invulnerable; fate had it that Elisabeth’s own son should also die to an arrow, but this time in the heart, shot by his forbidden love. 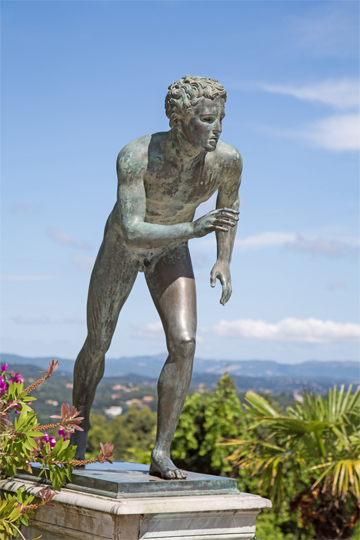 The palace features various portrayals of the Iliad’s hero. The marble statue of “Dying Achilles” in the gardens portrays the demigod with an expression of pain as he tries to pull the arrow out of his heel. The statue was created by German sculptor Ernst Gustav Herter and is the centerpiece of the palace. Both the interior and exterior areas of Achillion abound with works of art with clear ancient Greek influences in theme and style. The most prominent among the statues in the peristyle and outside the mansion are the Nine Muses followed by Eros, Satyr with infant Dionysus, the two bronze statues portraying wrestlers-runners, and “Resting Hermes”.

Inside, a beautiful fresco depicting the Four Seasons decorates the ceiling of the entrance hall. At the end of the imposing stairway, the hall is dominated by “The Triumph of Achilles”, a large oil painting by Austrian artist Franz Matsch. In it, the hero is seen on his chariot, dragging Hector’s lifeless body out of the walls of Troy. Sisi’s Catholic chapel is also impressive. The rooms showcase memorabilia of the Empress and Kaiser Wilhelm II, photographic documents, medals, rare books and various items. 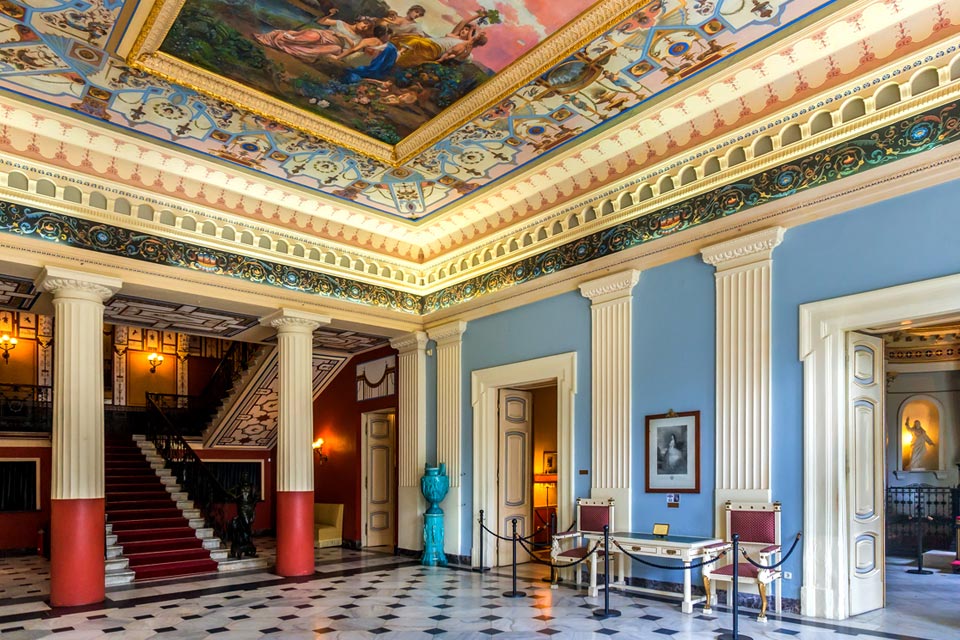 EMPRESS ELIZABETH SUPERVISED THE DECORATION OF THE PALACE.

After Elizabeth’s assassination in Geneva in 1898 by the Italian anarchist Luigi Lucheni, the mansion was abandoned until it was purchased by Kaiser Wilhelm II, who commissioned the grand bronze statue of “Achilles Victorious”. For the German Emperor, the demigod represented his personal military genius and future victories as leader of the Prussian forces, his own “Myrmidons”. During World Wars I and II, Achillion was used as a hospital and military headquarters. After the war it housed schools, and in 1962 it was leased out to a German company that turned it into a casino. In 1982 its management returned to the Greek State. In 1994 the palace hosted the European Union Summit. Today it is managed by the Hellenic Ministry of Culture. 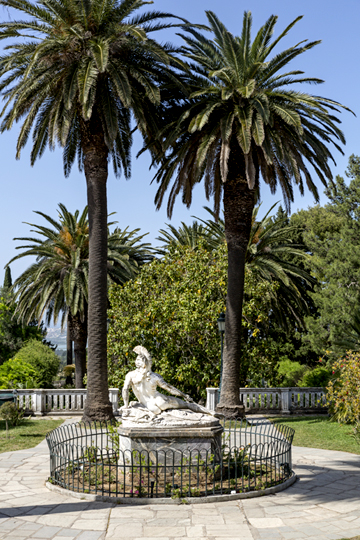 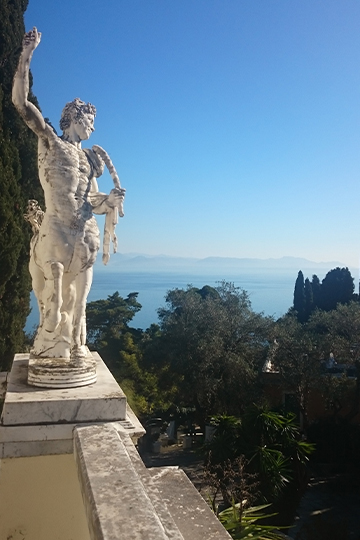 INFO //
Achillion is open daily from 8:00 to 20:00. Ticket prices range from 2€ to 10€, depending on age, any discount entitlements and whether audio guide is included. achillion-corfu.gr

1837 / Birth year of Elisabeth, the Empress of Austria.

1854 / Wedding of Elisabeth and Franz Joseph I Habsburg.

1890 / Start of construction works on Achillion which were completed in 1891.

1892 / Completion of the oil painting “The Triumph of Achilles”.

1907 / Purchase of the mansion by Kaiser Wilhelm II.

1955 / Release of “Sissy”, an Austrian film about Elisabeth’s life, with Romy Schneider. 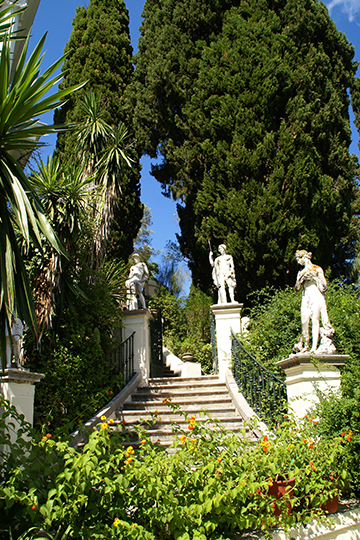 Melissani, the cave of the nymphs

Reborn from the sea