The local architecture is the living proof that art can appear randomly. 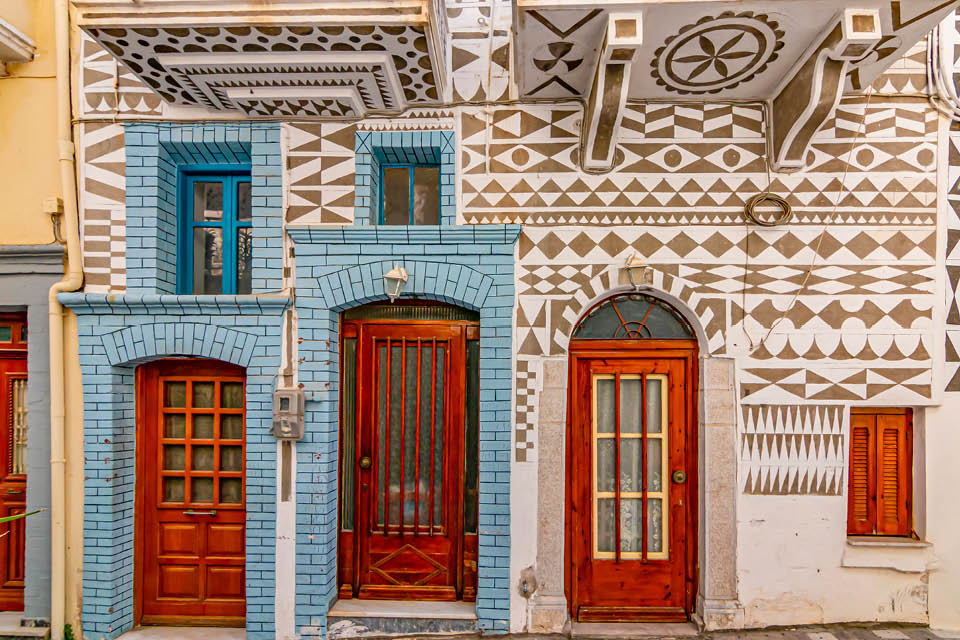 Chios
Apeiranthos
THE CAVE HOUSES OF SANTORINI, THE MASTIC VILLAGES OF CHIOS, AND APEIRANTHOS VILLAGE IN NAXOS ARE AMONG THE FEW PLACES THAT SHOW UNIQUE ARCHITECTURAL STYLES

Cave dwellings (hypόskapha), Santorini / Nearing Caldera by boat, the white domed houses stand out
from afar thanks to the plasticity of their shape. Assembled volumes which come alive under the sun, setting up a wonderful game with their shadows and giving the impression of being works of sculpture rather than architecture. Churches, kanaves (wine storerooms), warehouses, cave dwellings carved into the earth, seem to hang over cliff edge. They are built so close together that they intrude in one another. Public and private spaces get entangled, they become as one –one’s roof constitutes the balcony of another- creating an image of architectural anarchy. Nevertheless, the typical buildings of Santorini are not the works of some renowned architect, although they constituted an inspiration for legendary modernist architects such as Swiss-French Le Corbusier or Finnish Alvar Aalto.
These houses were built by unskilled workers, poor residents and ship crews who wanted to cover the basic need for housing with stubbornness against the unfriendly cliff slope. The lords, captains and rich people in general, did not build their houses on the edge of the cliff. They lived in neoclassical houses on the upper part of Oia or in the northern side of Fira. The cave dwellings share narrow spaces carved through the rock inwards, without foundations, with domed roof (due to lack of lumber), close facades but with big depth. The construction logic and the building materials communicate directly with the specific geomorphology of Santorini. The building materials are red and black stone, lime, the Therian lava earth or «aspa» as locals say, the hard and cohesive ground, constituted of successive layers of volcanic material, which thanks to their insulating properties, keeps them warm into the winter, cool into the summer and resilient to earthquakes.
The fact that they exist proves, without a doubt, that art and superior aesthetics can result from chance; a combination of human need, geological conditions and natural limitations.

Mastic Villages, Chios / The unique architecture, the special beaches, the historic monuments stand out in Chios, but mastic is the local product that has made it a brand destination since antiquity. It gave its name to the medieval -with common features in their urban structure- settlements of southern Chios, the well-known Mastic villages, a part of the island’s identity, pregnant with history and tradition. Their founding dates back to Byzantine times and despite the wear and tear they have suffered over the centuries, they are still cultural heritage sites.

Apeiranthos Village, Naxos / Built between two valleys with vineyards and orchards, the mountainous Apeiranthos is a traditional stone-built village at the foot of Mount Fanari which retains its Venetian architectural form almost intact. Fanariotissa, the chapel built in 1886 by Apeiranthos shepherds at the top of the mountain, it a 45 minute walk from the village. As you climb the path that leads to Fanariotissa you are enchanted by the beautiful nature, the phrygana, the gray mountains, the soaring birds, the smell of thyme, oregano and spartium. Up there in Fanariotissa the view is thrilling. You look out on the blue Aegean and your gaze takes in the whole of Naxos and almost all of the Cyclades. 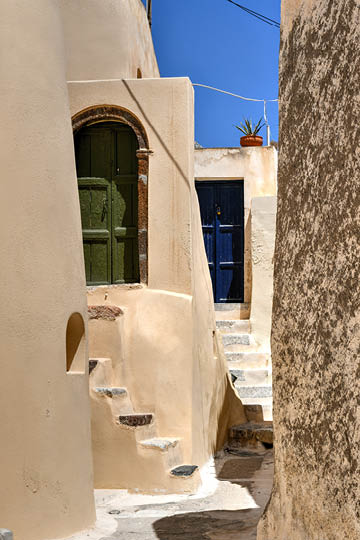 The place to dine for in Mykonos

From Peru to Mykonos