For over 150 years since the establishment of the Presidential Guard, the country’s highest guard of honour tremendous value has never faded. 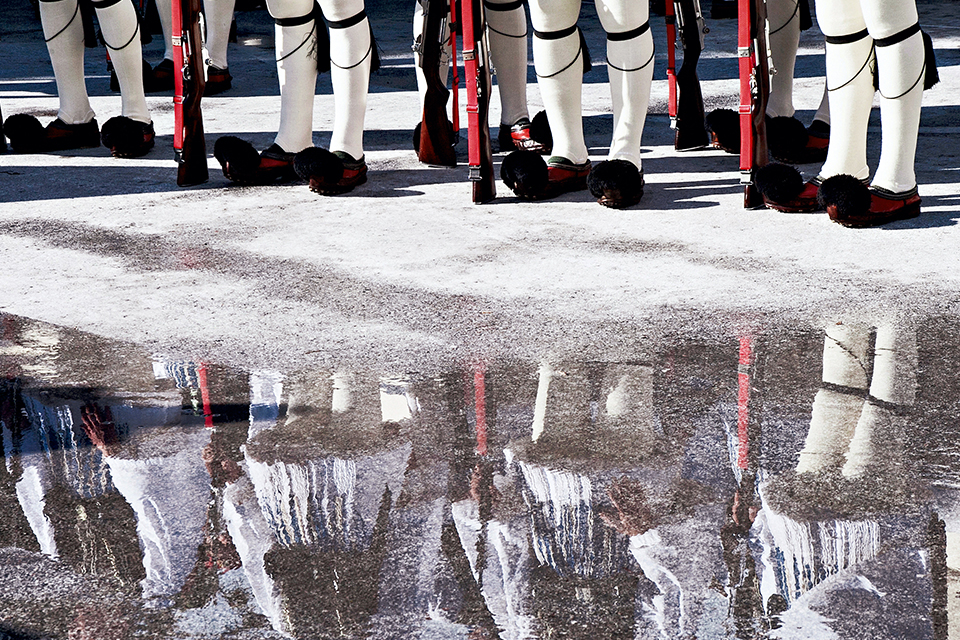 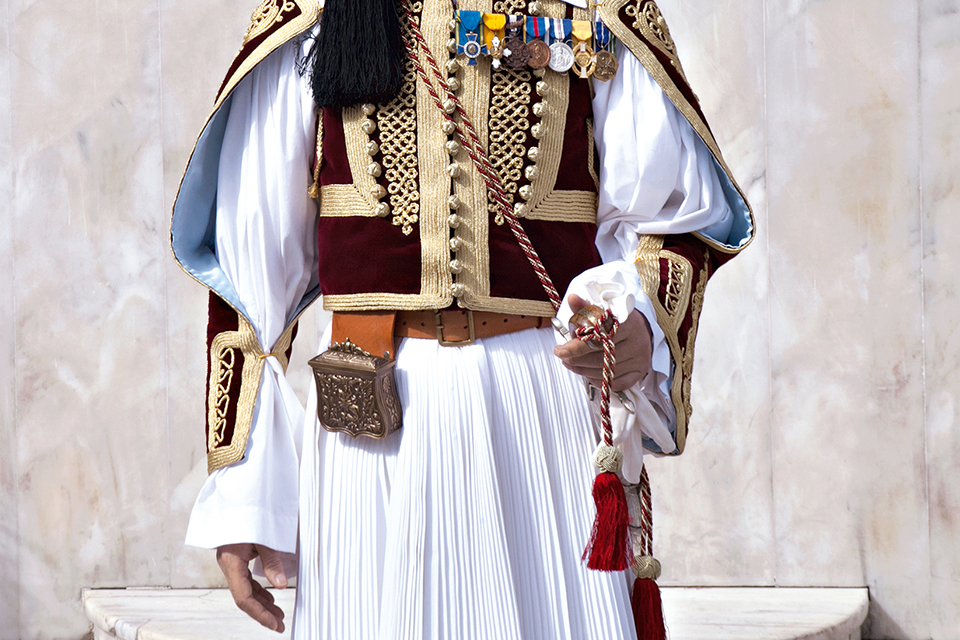 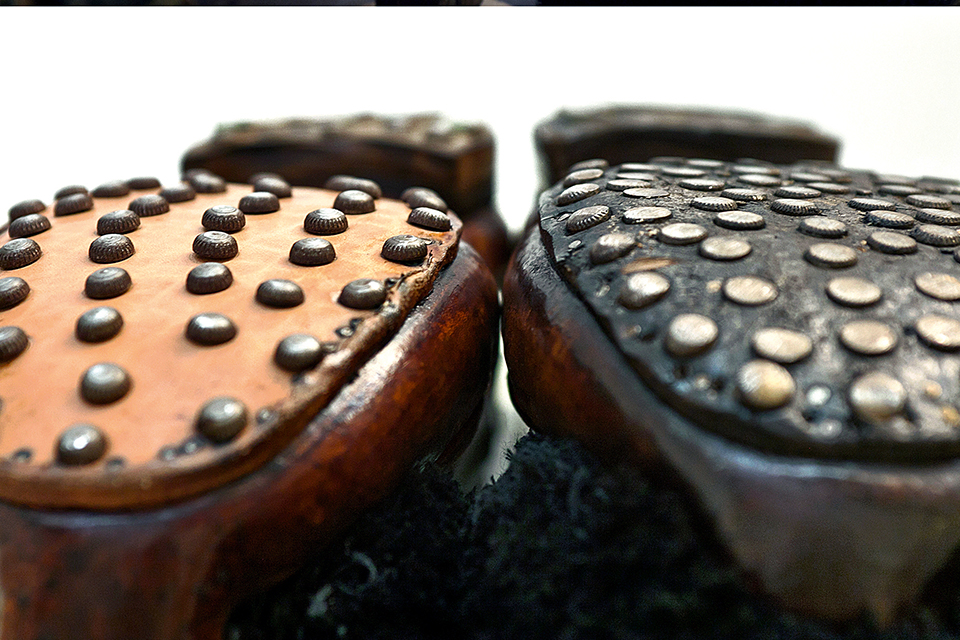 THE EVZONES EXERCISE EVERY DAY AT 6.30 a.m. FOR ONE HOUR AT THE PANATHENAIC STADIUM. GETTING DRESSED TAKES ALSO ONE HOUR.

In Constitution Square, on Vasilissis Sofias Street, at the Acropolis and at the Presidential Mansion, the Evzones astound passers-by with their lofty poise, their fine-tuned choreography, their stately pace, and, above all, their luminous eyes alight with determination and inner strength. A legend lies hidden behind the proud men donning the foustanella kilts. After spending five years behind the closed doors of this elite military unit, Mrs. Dimitra Hatziadam, the only accredited woman photographer of the Presidential Guard, is ready to unravel Ariadne’s thread and narrate the things she saw, experienced and photographed inside their camp. “Evzon tries every minute the limits of his stamina and patience with any weather conditions and as long as the ritual that he is required to follow”, she notes. The less-known aspect of their lives is strenuous and hard to bear. When near them, you neither see a speck of “stardust” nor hear a word of praise. No wonder only 50% of the soldiers selected to serve as Evzones eventually pull it through. Two phrases define their behaviour: “What is legit” and “What is not permitted”. Their code of ethics has to be followed to the letter and without transgressions throughout their service. 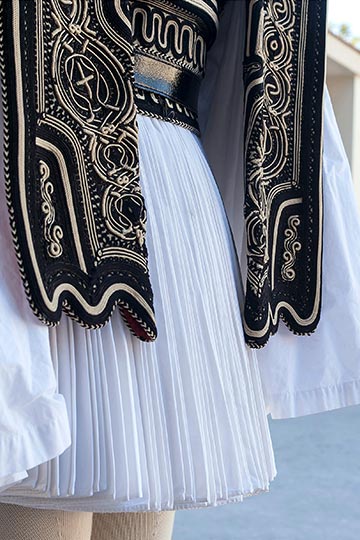 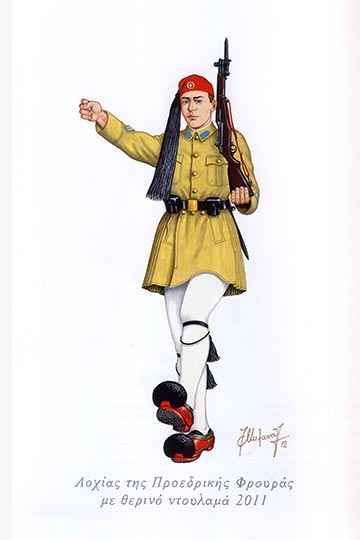 The Summer doulamas (a kind of tunic) is a khaki cotton uniform worn in the Balkan Wars. The Winter doulamas is the uniform from the region of Macedonia inside which a gold button is sewn as a symbol of the chopped off head of Pavlos Melas that was never found. Sunday’s formal uniform features the famous white foustanella (a kind of kilt).

In special occasions, such as the remembrance day of the Pontiac Greek Genocide, two Evzones wear the traditional uniform of Pontos and accompany the classic Evzones. The Cretan uniform is worn on official ceremonies at the Presidential Mansion and at parades. 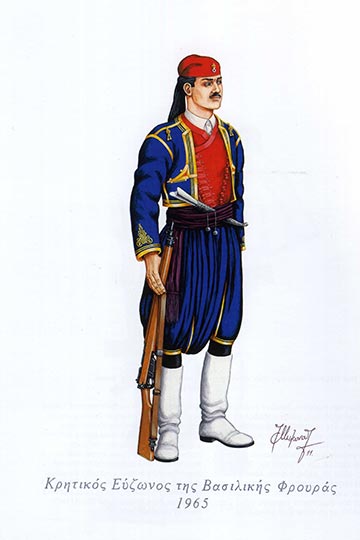 The Evzones stand as a national symbol and this realisation is always in their mind when they are trained; when they pace; when they stand still at the Sacred Rock of the Acropolis for the official hoisting and lowering of the flag; when they honour the Unknown Soldier. The Evzone is an anonymous Greek soldier who gives his life for freedom, but he also represents all those who fought and fell. His uniform is full of symbols that relate to milestones of Greek history and significant events. There are little “secrets” in the daily ritual they perform that the public knows little about. Nonetheless, they are important in their own right securing a smooth operation and the best possible outcome. Completing one’s service at the Presidential Guard is simply beyond human capacity, since the Evzone is obliged to stand stone still and communicate anything out of the ordinary only by subtle signalling. In fact, the Evzones wear very heavy and hard-to-bear accoutrements, which, in bad weather such as rainfall, become almost unbearable. Yet, they overcome all of that, because for the Evzone it is an honour to serve in the Presidential Guard, and an obligation towards his homeland. As Mrs. Haziadam points out, it is not merely his body that undergoes training but his soul too; it is his soul that leads him, not the pacing protocol; it is the way he thinks that makes him stand still for an hour, not the orders he has to follow. The Evzone is the ideal image that mirrors Greece through the struggles for its independence. He is the ultimate symbol of heroism, respect and honour to those who fell in battle – to the unknown soldier. There are not many bright spots in the military course of an Evzone, since they are absolutely devoted to what they are doing. They believe in it and, thus, every ordeal is considered a duty. Their term of service lasts nine months and that experience stays with them for a lifetime. 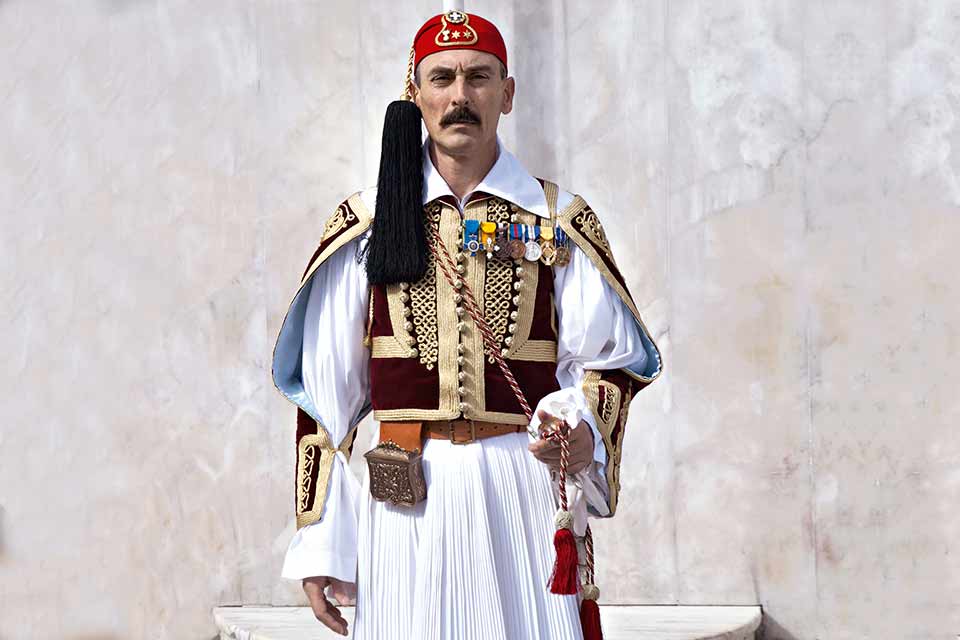 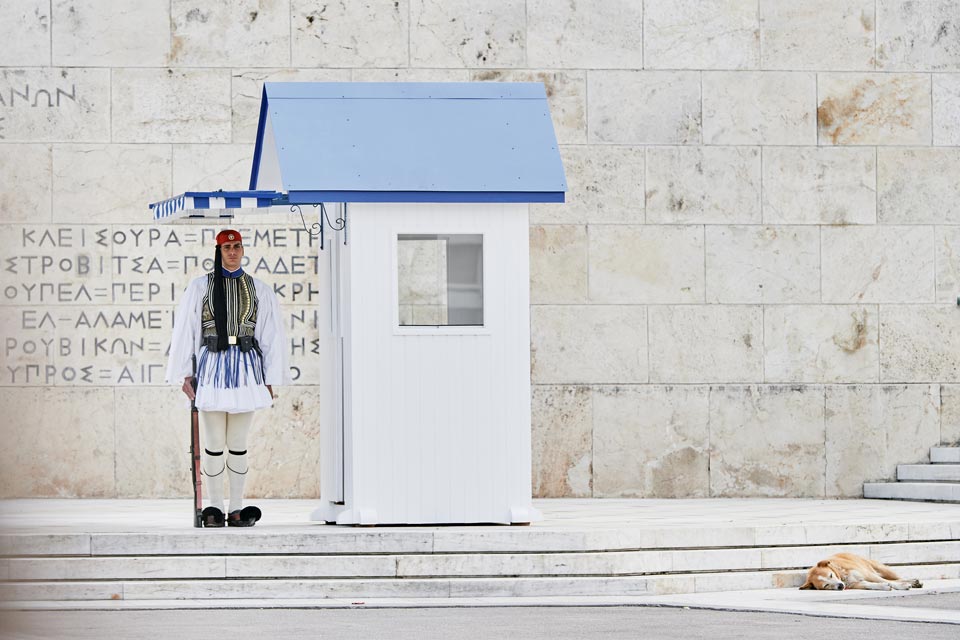 Hadrian / Shutterstock.com
THE EVZONE IS THE IDEAL IMAGE THAT MIRRORS GREECE THROUGH THE STRUGGLES FOR ITS INDEPENDENCE. HE IS THE ULTIMATE SYMBOL OF HEROISM, RESPECT AND HONOUR TO THOSE WHO FELL IN BATTLE - TO THE UNKNOWN SOLDIER. 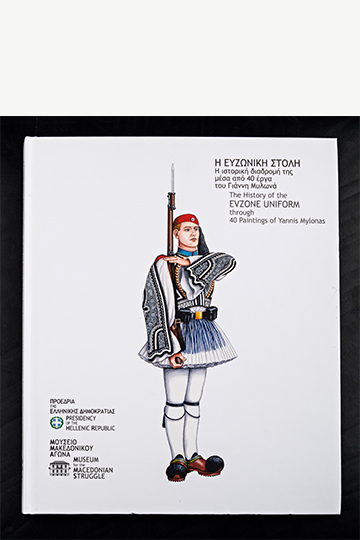 The Evzones have always been the subject of admiration and art could not remain indifferent to their appearance and history. Yannis Milonas is a researcher on the evolution of military uniforms and a special costume designer and firearm specialist for the War Museum since 1987. Additionally, he is the author and illustrator of many pertinent books, including “The Evzone’s Uniform”. With a series of 40 magnificent realistic drawings that have already been exhibited, shares with us his take on the uniforms donned by the Evzones over the years on different occasions. On these pages, you see some of the artist’s characteristic drawings that belong to the private collections of Alexandros and Lena Haitoglou. In their full attire, men dressed in fustanella kilts originating from various regions of Greece lead us on a long journey through the history of Modern Greece: men from Mani, Roumeli, Macedonian fighters of the Balkan Wars and Evzones of the Royal Guard meet on the path to a single destination: the fight for the country’s independence. A turning point for the establishment of the fustanella as the typical dress of the Hellenic nation was the decision of King Otto in 1836 to be photographed in one fustanella kilt. 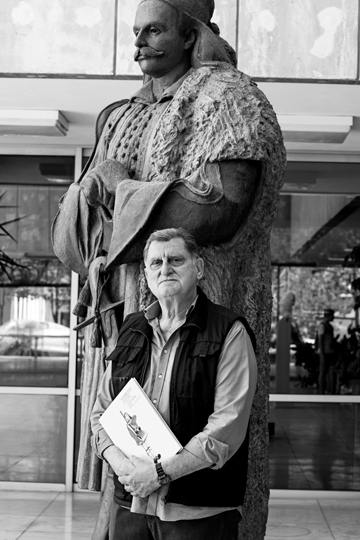 Dimitra Hatziadam has photographed and edited the photo exhibition & photo album entitled: “Evzones, the guardians of the unsung”.

You will love this cute jewelry shop

If the shoe fits

The new fitness trend and where to work out in Athens

The sweet side of Athens