The centre of the Minoan Civilization 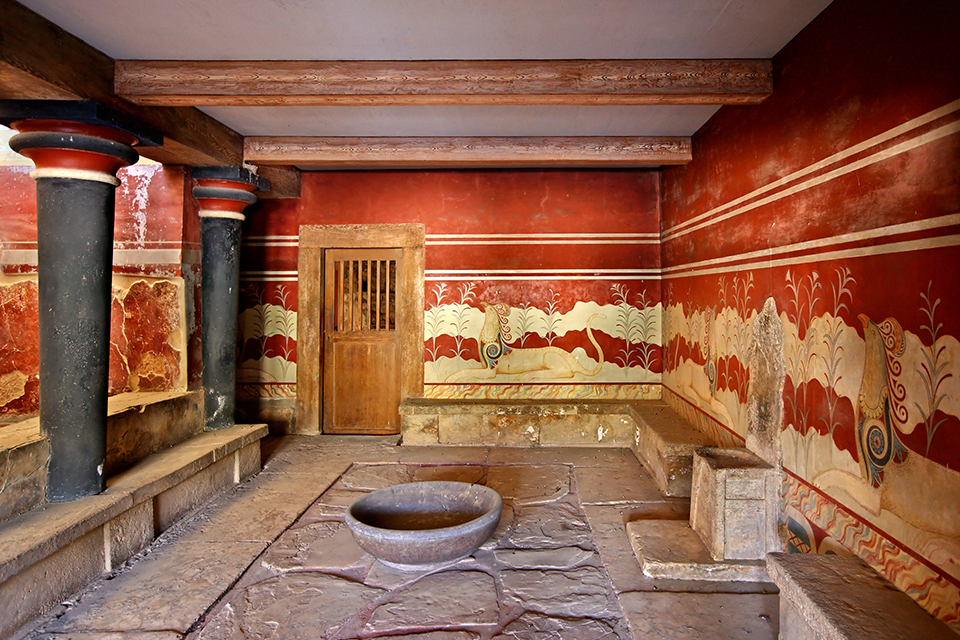 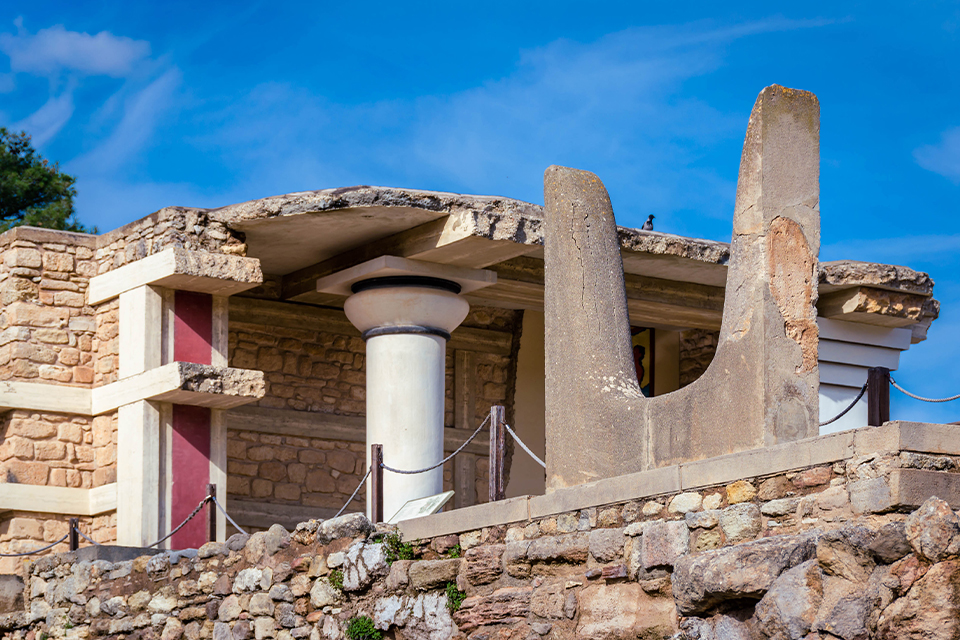 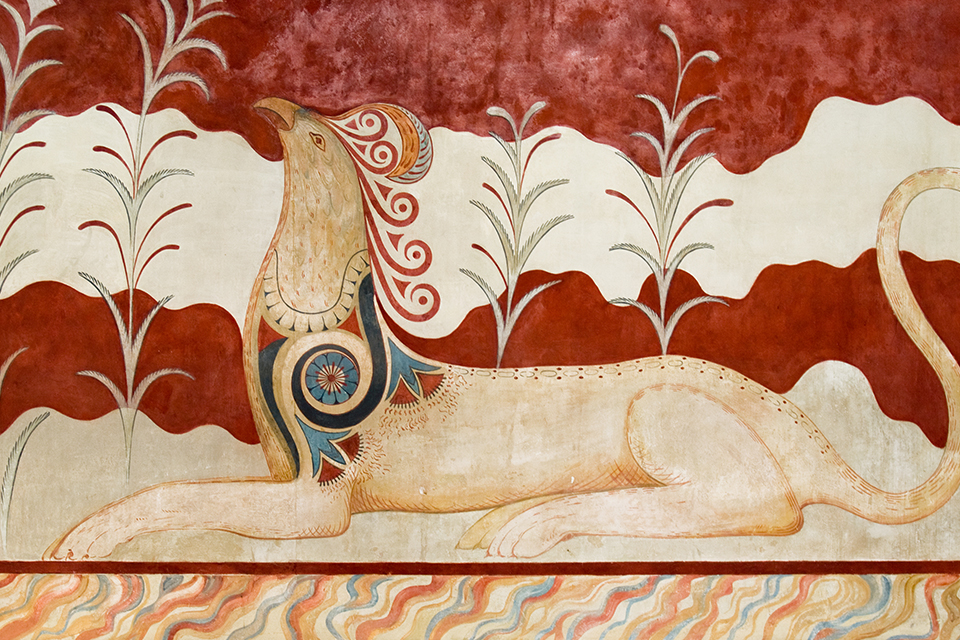 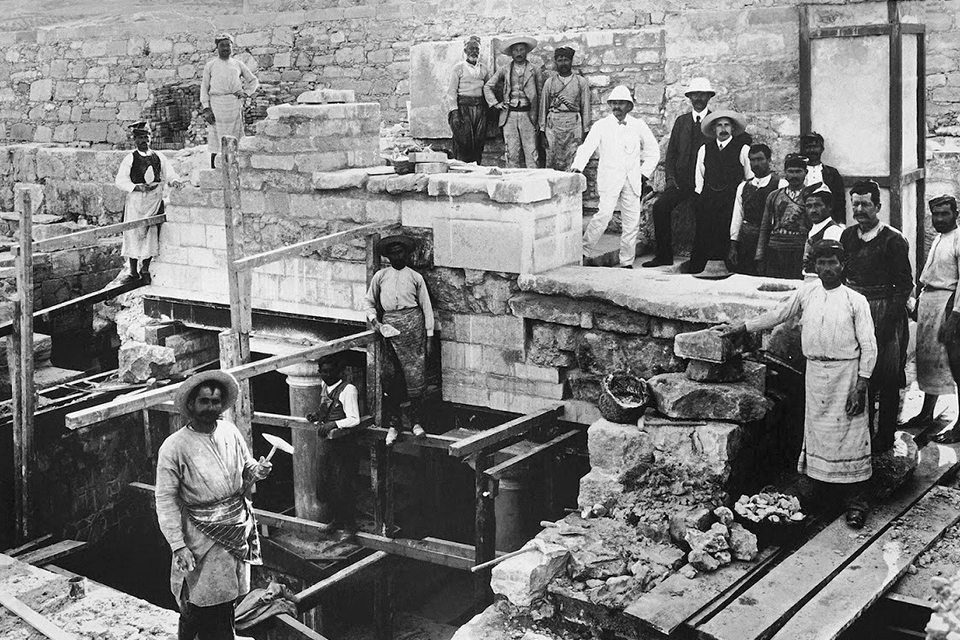 Sir A. Evans (in white) watches the restoration of the Grand Staircase of Knossos Palace / Courtesy of the Ashmolean Museum in Oxford. Ekdotiki Athinon, «Knossos» publication by archaeologist Anna Michailidou
The Ladies in Blue fresco / Shutterstock
KNOSSOS WAS THE KING’S SEAT AND A MAJOR COMMERCIAL CENTRE

The capital of King Minos’s kingdom was built on the hill of Kefala amongst tall cypresses, olive trees and vineyards. The king’s palace stands on the hill, from where it could overlook the surrounding land and sea. It was from that very sea that the white bull sent by the god Poseidon arrived to grant power to King Minos. And when he violated his promise and kept the bull in his stables instead of sacrificing it to the god, Poseidon punished him by making Queen Pasiphae fall so much in love with the animal, that she convinced Daedalus to make a hollow decoy cow to fool the bull into mating with her. The offspring of this ill-matched union was the horrid Minotaur – a monster with the body of a man and the head of a bull – for which Athenians were forced to send an annual blood tribute of 7 young maidens and 7 young men.

Entering the archaeological site from the western entrance, Sir Arthur Evans’ bust reminds me of the British archaeologist’s lifework. The city had been initially discovered by the merchant Minos Kalokairinos in 1878 and was gradually brought to light by Evans’ spade in excavations that lasted for thirty years (1900-1931). “It was an idea, my work…”, remarks the visionary archaeologist who managed to confirm the ancient legends. I am strolling around and images spring to life: I can see Daedalus constructing the Labyrinth beneath the Palace and later on the dashing Theseus setting sail from Athens to save the Athenians. I can imagine King Minos’s daughter Ariadne falling madly in love with him and handing him the ball of thread – Ariadne’s thread – that would help him enter the Labyrinth without getting lost and thus kill the Minotaur. 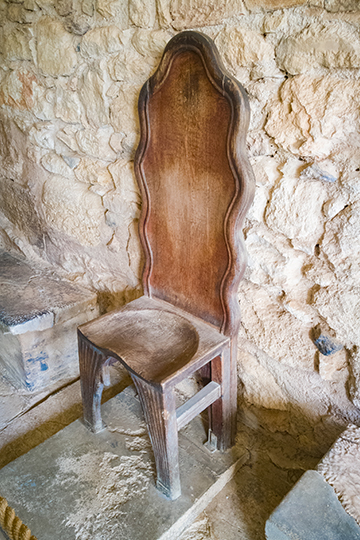 The West bastion, with fresco (duplicate) of the sacred bull / Shutterstock 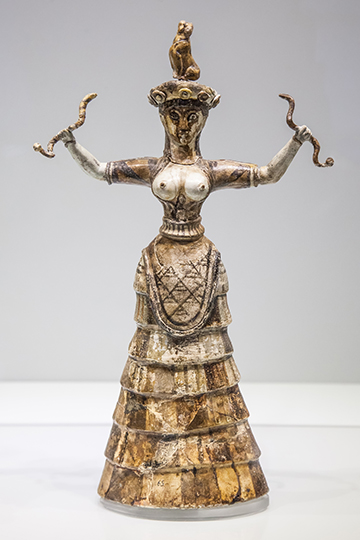 After 1700 B.C., when the city was leveled by an earthquake, a complex of grandiose, interlocking, multi-storied palaces was built on the remnants of the old ones. The palatial complex covers an area of 20,000 square meters and is characterized by an avant-garde architectural style, support pillars, a variety of construction material, an enviable drainage and a separate water supply system bearing testament to the advanced level of civilization. The interiors are luxurious, painted in vivid colors and multicolored frescos. The palace’s four wings are arranged around the main courtyard where the “tavrokathapsia” (bull-leaping) used to take place. This was a ritual where athletes grasped the bull’s horns and vaulted over the animal’s back trying to sit on it.

I begin my tour from the West Wing and admire yet again the big stone sacred-bull horns that used to adorn the palace’s top. Continuing my tour the staircase leads me to the Sacred Room or Piano Nobile (Floor of the Noble), as Evans called it. The view of the other buildings is magnificent from this spot. In the Throne Hall I catch myself day-dreaming whilst admiring the frescos, the alabaster throne and the expiation sink. Crossing the West Court –a rite area as well as the Palace’s official entrance– the Procession Corridor of the Southern entrance, reveals the reproduction of “The Prince of the Lilies”, the famous relief fresco. Its original, along with several other magnificent findings from the Palace, as well as the Linear B archive of tablets, are exhibited in the Archaeological Museum of Heraklion.

The royal apartments are located in the Palace’s East Wing. A large stairwell leads to the Hall of the Double Axes and the Queen’s Suite which is decorated with the famous fresco with the dolphins, and comprises a bathroom and a dressing room. I stand in the Corridor of Zatrikios –a kind of chess– and I have the impression that I am listening to the rustle made by the Queen’s dresses crossing it or the sounds and laughter when she is playing the favorite game of the Minoan people. In the North Wing, the entrance of which is connected to the port, the Theater and the Customs House prevail while the paved Royal Road leads to the Little Palace.

By the time the first visitors arrive I have already finished the tour of the main area. I am thrilled and manage to convince my friends to follow me to the neighboring edifices: the Royal Mansion with the numerous doors and the double stairwell, the House of Frescos, the Caravan Seraglio where visitors used to stay, decorated with frescos representing hoopoes and partridges. Further ahead, I shall visit the Priest’s House with the stone altar with the double axes, the Unexplored Mansion, the Royal Tomb where some Minoan king rests, and the South Mansion with the three-storied expiation sink. Naturally, I can’t miss the Villa of Dionysus, built in Roman times, with Apollinaris’s famous mosaics depicting Dionysus. It’s now high noon. Our friends have already arrived at the Lions (Morosini Fountain) the favorite meeting point of the people of Heraklion. A coffee before lunch sounds like a good idea, doesn’t it? 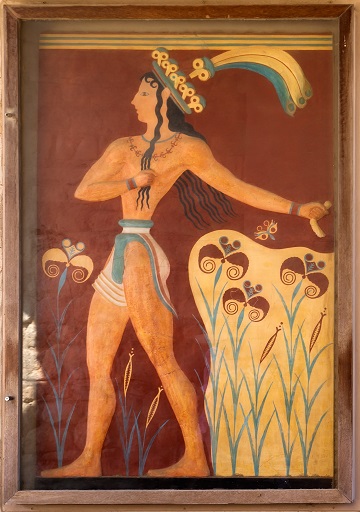 Authentic Crete on a plate

Through the lens of…

The quintessential beauty of Balos

The Cretans know the art of slow cooking