THE GRAVITATIONAL PULL OF A UNIQUE PERSONALITY

An encounter with the legendary intellectual, author, scholar, soldier and polyglot, Patrick Lee -Paddy- Fermor in his house in Kardamyli, in the Mani Peninsula of southern Peloponnese. 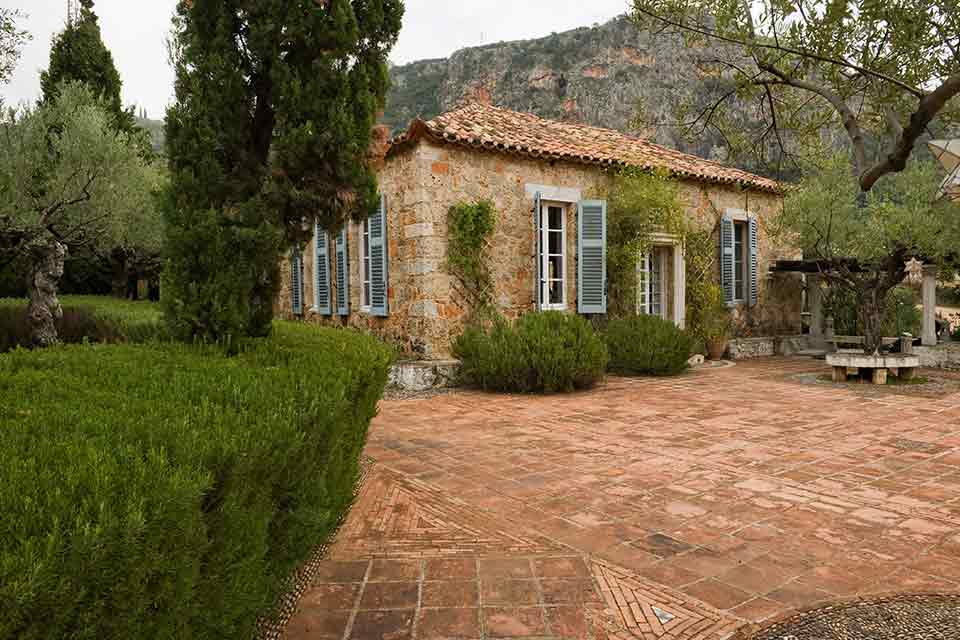 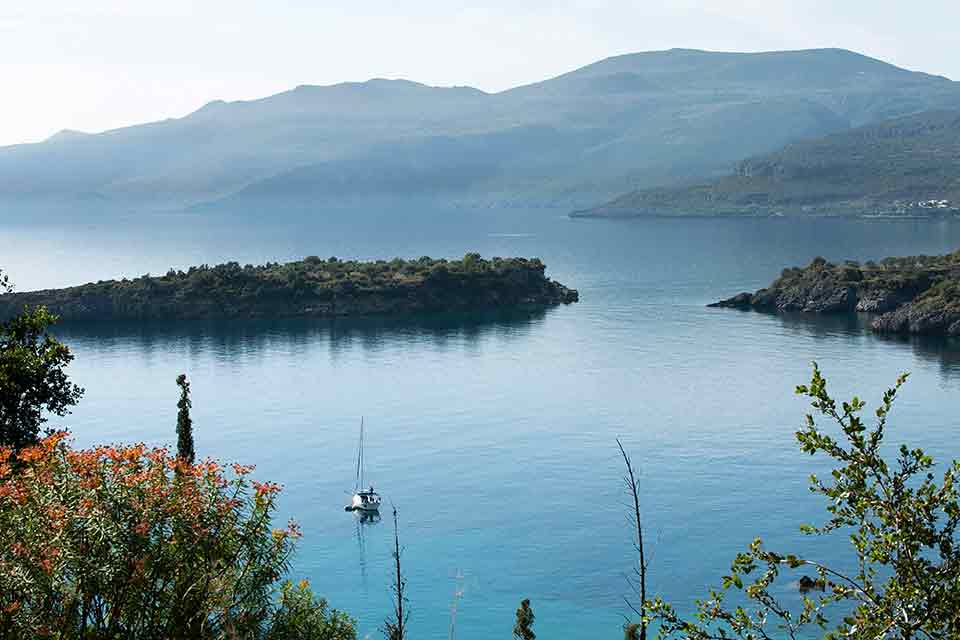 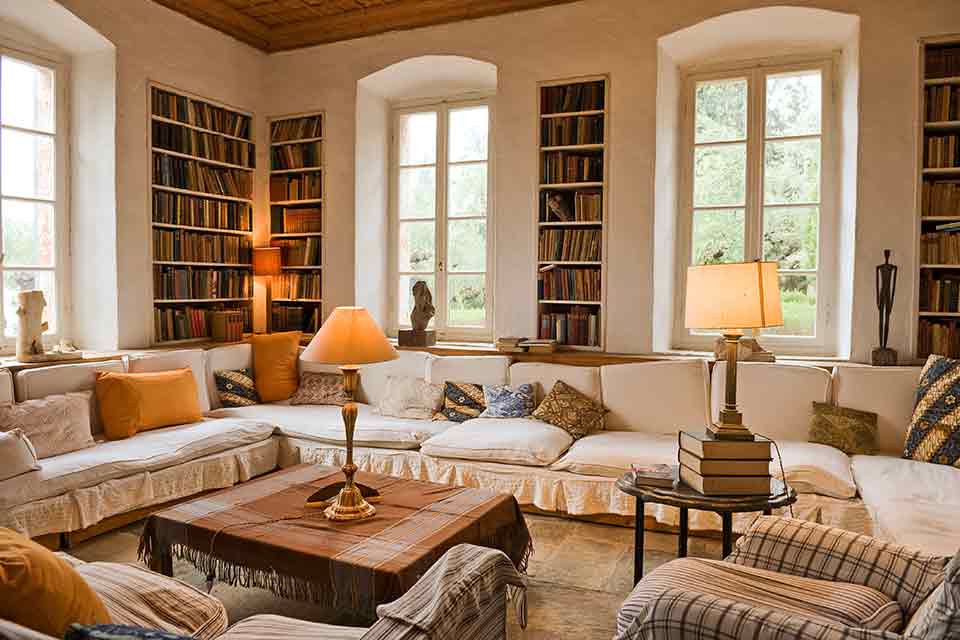 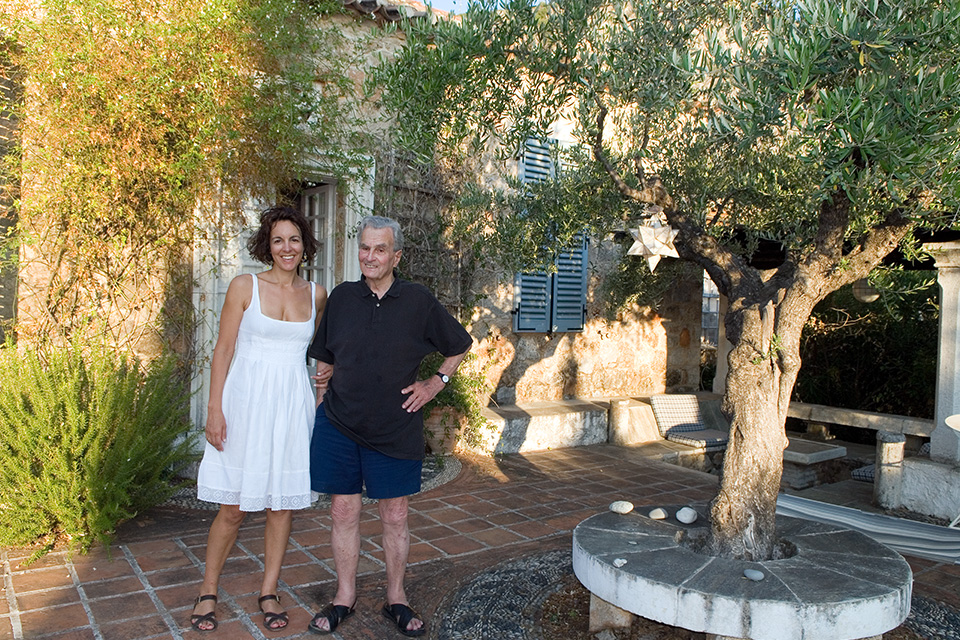 July 2007 – I was on holiday in Kardamyli when a friend threw out the idea that I should get to know Sir Patrick Leigh Fermor. I was excited by the idea, and thought that this would be quite easy, but during the next few days I realized that it was really rather difficult. I had almost forgotten about it when someone offered to introduce me to his doctor, Mr. Orphanides, who then readily agreed to my accompanying him on his next visit to Fermor.

We descended the slope through the terraced olive grove and ended up in front of a high wall with a wooden door. A kindly lady opened the door and welcomed us into the courtyard, where we walked along the side of the house until we reached a large patio. When I saw the view from the house and the sea below, I was speechless. In my long career as a travel and architecture photographer, I had never seen such a house in Greece, so perfectly in harmony with the surrounding landscape.

I sat on the balcony of the patio up above the sea, and couldn’t stop staring at the superb pebbled floor and the stone table and sofas, with the sea in the background. After a brief wait, Dr. Orphanides called me in to introduce me. We passed through the interior of the house and stepped out onto the loggia. Sir Patrick – kir-Mihalis for the locals, as his middle name is Michael, and Paddy to his friends- was seated behind a table that was being used as a desk at the back of the loggia. He sat up and we shook hands. 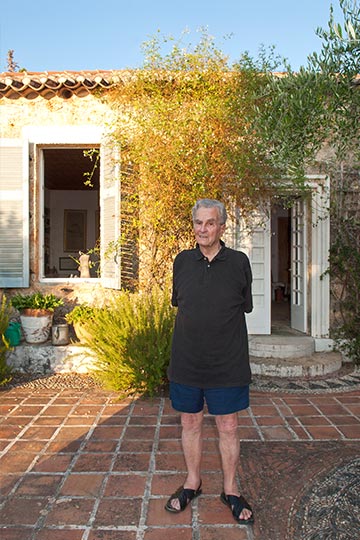 FERMOR’S BOOKS, ESTATE AND HIS RELATIONS WITH THE LOCALS, REVEAL HIS DEDICATION TO GREECE.
JULIA KLIMI

The desk had a view of the mountain, and was piled with manuscripts and a typewriter. Fermor invited me to sit on a chair next to him. Most likely this was the corner of the house that he used as a summer office, because his real office was in a bright room behind us. Tea served, I asked him what he was writing. He answered that he was working on the last volume of the trilogy he had begun in 1962, and which describes his long walk across Europe from the Hook of Holland to Istanbul at the age of 18, a walk that began in December of 1933 and ended in January of 1935. The first book of the trilogy was entitled, A Time of Gifts (1977), the second, Between the Woods and the Water (1986). “The last part of the journey starts from the borders of Romania with Bulgaria and ends in Constantinople! I am trying to catchup,” he said. “What a great project!” I exclaimed.

He asked me about my job as a photographer and I told him about my book At Home in Greece (Thames & Hudson, 2004) and the idea behind it. He asked if I had it with me, and when I told him no said, “What a shame,” and made a gesture that expressed his disappointment. I thought how much I would have loved to have given it to him. In fact, one of the homes presented in the book – a 17th century house on Rhodes – was restored by Nikos Hatzimihalis, an excellent architect and expert on traditional architecture, who happened to be the very same architect who had designed this home. I handed him my copy of his book Mani and he signed it for me, adding some words in a very ritualistic manner. We went out to the patio, where I took a few fleeting pictures of him in the beautiful afternoon light. When Dr. Orphanides offered to take a picture of us, I took his arm, feeling quite intimate with him. 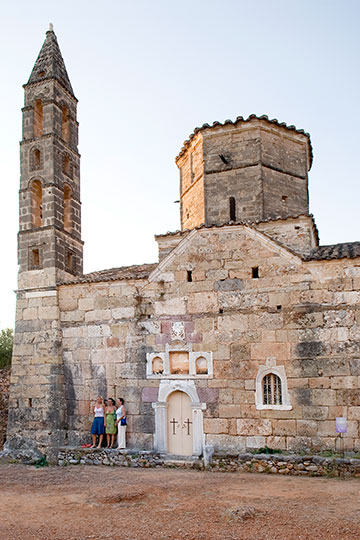 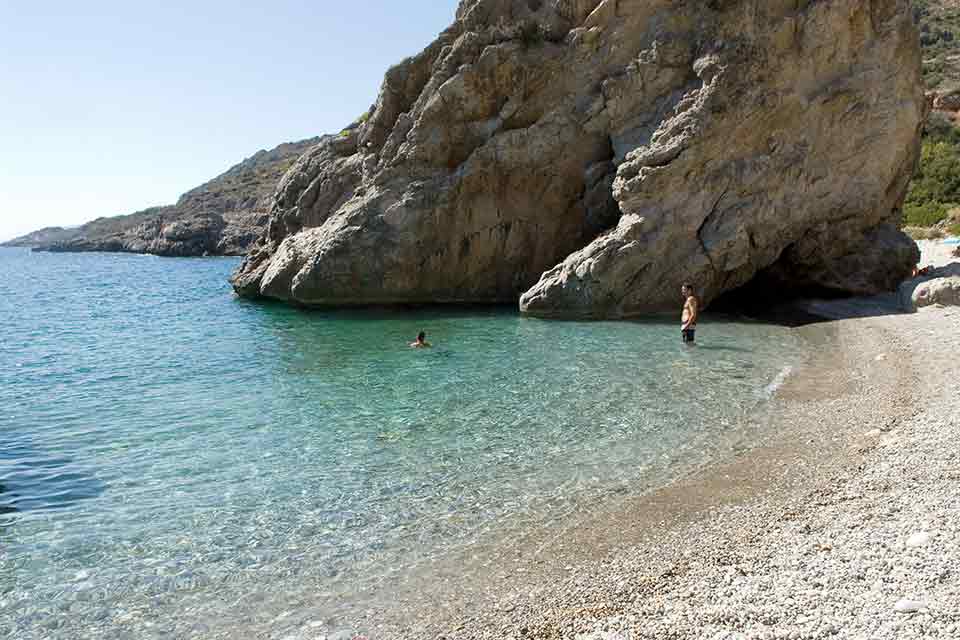 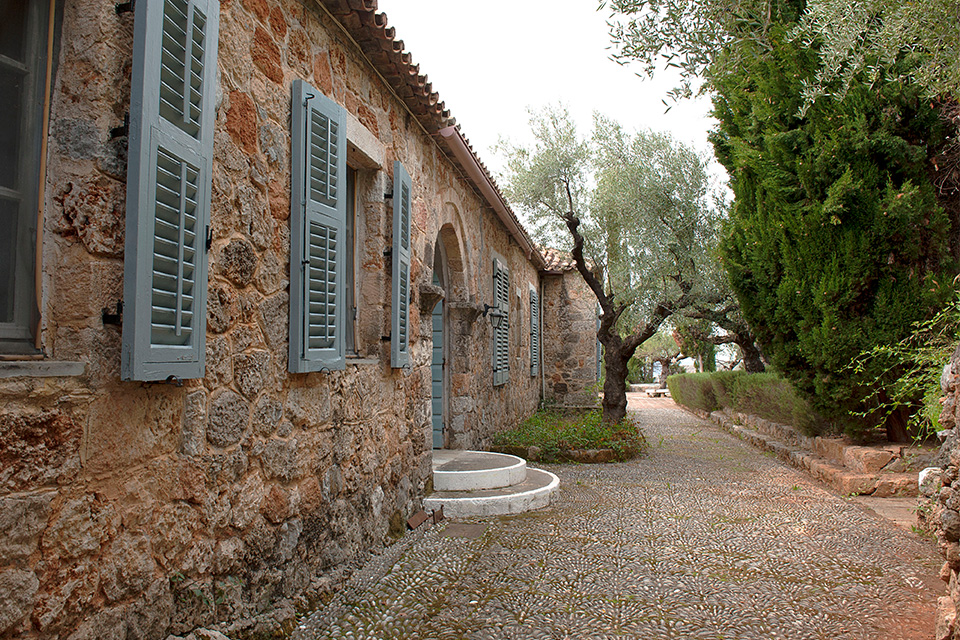 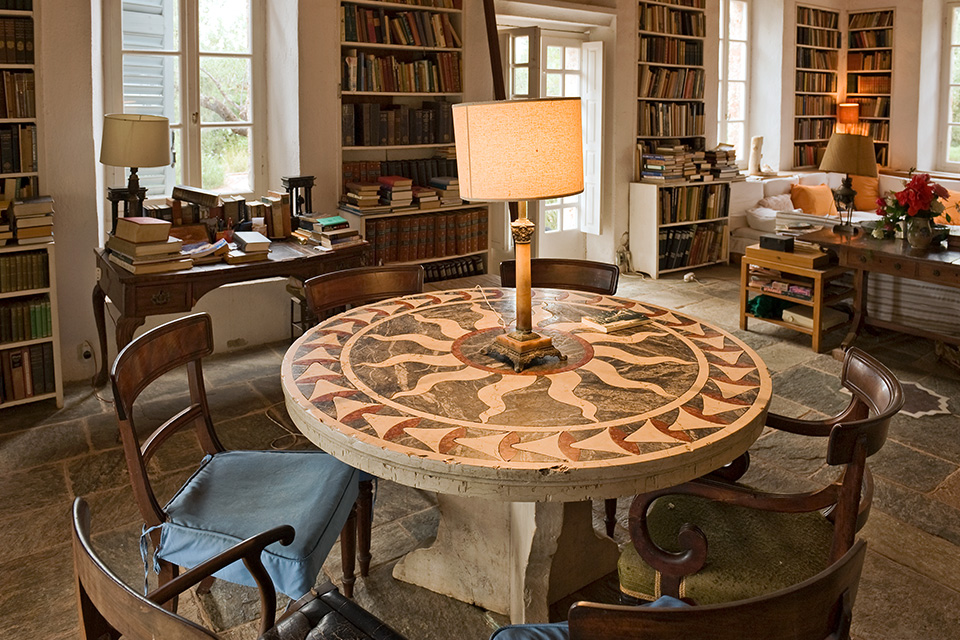 FERMOR’S BOOKS, ESTATE AND HIS RELATIONS WITH THE LOCALS, REVEAL HIS DEDICATION TO GREECE.

Then he offered to show me the house. We entered through the living room – “the chief room” – as he called it, where he showed me the library which lined all of the walls, and I thought to myself that I would love to stay here for two or three days, totally forgotten by the world. I admired the wooden carved ceiling, which was modelled after the ceilings of mansions in Ipiros, the art works on the walls (among them a painting by his friend Nikos Hadjikyriakos-Ghika, a leading Greek painter), the Ottoman fireplace and the floor, paved with stones from Pelio.

The sunroom, with its windows overlooking the garden, was a true surprise. “Oh, that’s simultaneously an English conservatory and a hayati (a hayati is a covered balcony in Greek folk architecture). What a wonderful idea! And what a wonderful table!” I said. “I painted it myself,” he told me enthusiastically. “It depicts a sun. The legs of the table are balcony corbels.”

“And the chairs, so classically Greek! You have chosen the very best of Greece!” I went on in childish excitement. He replied that all these furnishings he had created with his wife, Joan Elizabeth Rayner (Kyria Ioanna to the locals), and that every piece had remained exactly where she had left it at the time of her death. I took a few pictures of the house. We sat on the patio for a while, and then I got up, shook his hand vigorously and thanked him for his precious time, because I felt that his writing was extremely important and that the sooner he returned to his work the better. 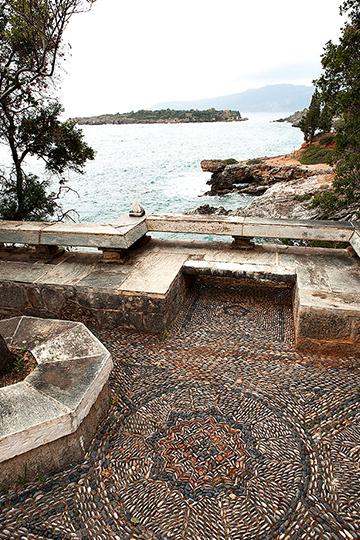 When, in the mid-1990s I started my career as a photographer and travel writer, I wanted to delve into travel literature. Besides the classic books of Kazantzakis, my attention was drawn by Michel Déon’s Page Grecques, Henri Miller’s The Colossus of Maroussi, and Patrick Leigh Fermor’s Roumeli and Mani. Of the latter two, Mani was a true revelation, revealing to me quite unexpectedly, the ‘authentic’ Greece of the 1950-60s, which I was seeing at the time in Olymbos, a village on the island of Karpathos which I was photographing that period.

Within the pages of Fermor’s books I discovered that it is the details of everyday life that reveal the character of a place, the world view of the Greeks as shaped by history, tradition, and superstition. Fermor believed that nothing indicated the continuity of ancient Greece in a more straightforward fashion than the preconceptions and habits, pagan and religious, that still prevailed in the remote mountains and islands. He was so right about this.

It was during the Easter of 1993 that the customs of the village of Olymbos, and in particular, those of Good Tuesday, launched me on a long “journey” of recording and photographing the life of the village during the following years. The litany of the icons in the valleys and the surrounding hills that we passed through, culminating in the cemetery for the “announcement of the resurrection of the dead,” and the offerings that the relatives handed out to the bystanders, surprised me. The ritual of eating food on the tombs and blessing the earth for its productivity reminded me of the Dionysian folk cults, along with the customs that my father, Odysseus-Karolos Klimis, documented in his laographic books.

Corfu, my hometown with its European influences -litanies, symphonic music- has nothing in common with the Karpathian village of Olymbos, but in the countryside of Corfu island the Easter and Carnival customs have roots in the ancient Greek traditions, and the customs involving figures such as the “old man and the old woman”, as well as the “burning of the ‘carnavalos’ (a human effigy)” they are totally identical to those of Karpathos, which as one would expect, have roots in ancient Greece.

Throughout Greece, the customs, whether those of Easter or of Carnival, have deep pagan root from ancient Greece, and Fermor suggests in his books that this is what unifies Greece (from Corfu to Karpathos, I might add). Actually Fermor was known to thunder angrily at the nouveaux sophomoric bourgeoisie who denied, or merely ignored the existence of those customs and scorned them as backward, “primitive” (and above all) “non-European.”

I returned to the house of Sir Patrick on November, 2010, this time by chance, with friends who live in Aghios Nicholas, a neighboring village. By coincidence, it happened to be the day of the celebration of his Greek name-day, Mihalis (back then I didn’t know that). The housekeeper remembered me. He told me that Paddy was bedridden and couldn’t talk, which made me very sad. We stayed for a little while and I took some photos. The following year, in June, at the age of 96, Sir Patrick passed away and attained immortality.

Fermor’s books, house, estate, relations with the locals, all reveal his love and dedication to Greece. And like his hero, Lord Byron, it was an experiential love that was born out of his acquaintance with Greeks on all social levels, and his deep knowledge of everything Greek. It is well known that the more you get to know a place the more you love it. I deeply appreciated him for his cultivation, and because I could actually empathize with his great love for Greece and understand how it was fed. Sir Patrick is my hero. 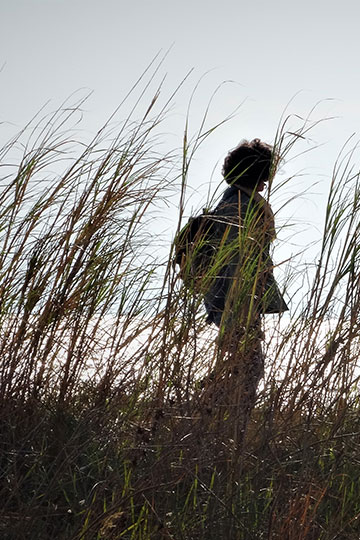 * The last book of the trilogy The Broken Road: From the Iron Gates to Mount Athos (2014) remained incomplete. The final editing was done by the famous travel writer, Colin Thubron, and Fermor’s biographer, Artemis Cooper. The book describes that last part of his great walk from the Iron Gates of the Danube to Constantinople, and ends with a most interesting visit of the writer to Mount Athos. 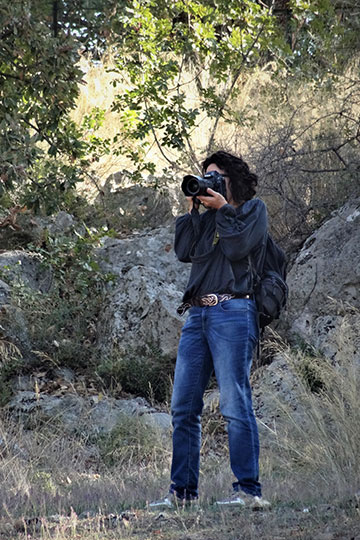 Special thanks to Julia Klimi for her text and images. Translation by Vicky Anastasiadou

The Parthenon of Peloponnese

The Environment Museum of Stymphalia

A toast to design

Wish you were here