Octavian built it when he was a regional ruler; he made it rich when he became the Roman Emperor. Nikopolis: An entire city rising from the time of the Roman Rule in Greece, a memorial of naval triumph and imperial vanity. 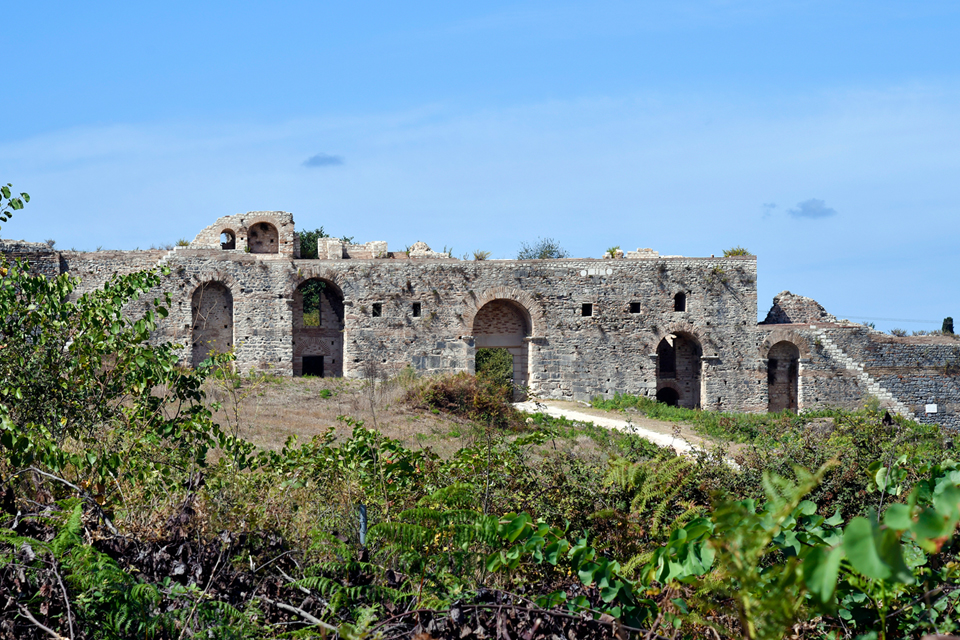 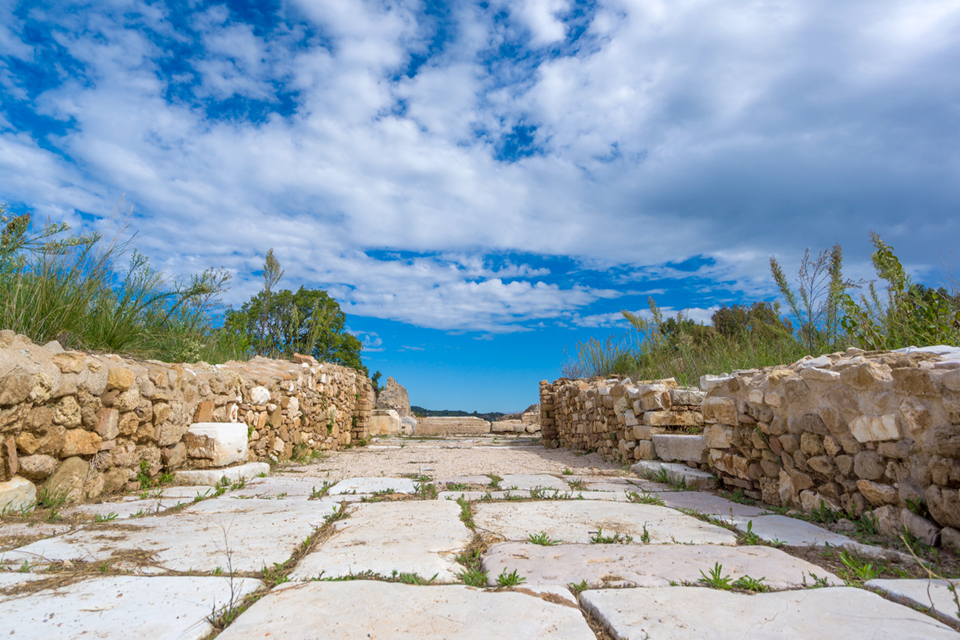 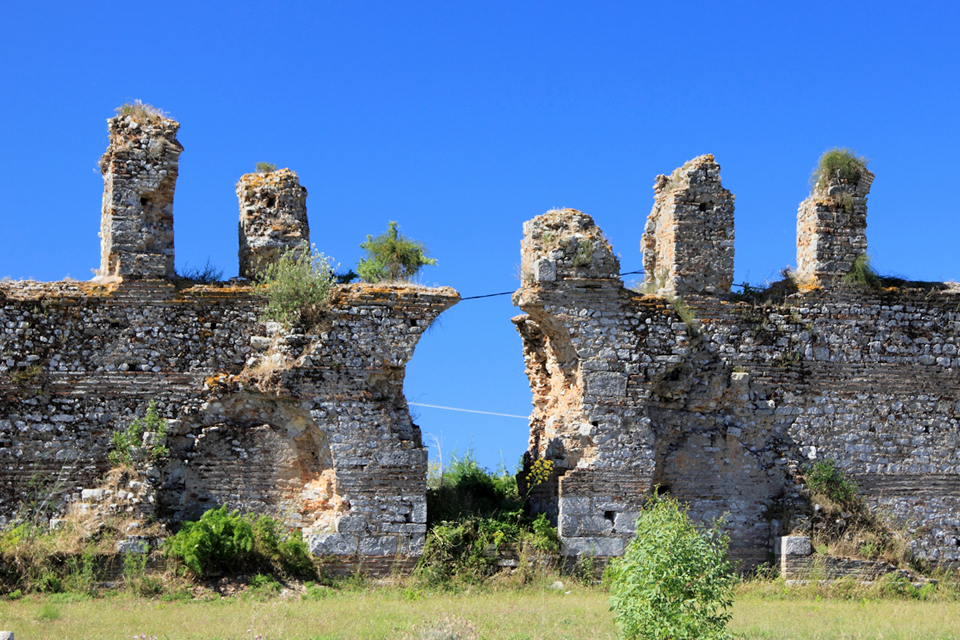 Founded by Octavian, also Gaius Julius Caesar Octavianus –later to become Roman Emperor Augustus– to commemorate his victory against Antony and Cleopatra in the Sea Battle of Aktium, Nikopolis, the city of victory, as its name implies, stands graciously in the region of Preveza. Thanks to the city’s three harbours, it became a major commercial hub, as well as the Romans’ administrative centre in western Greece.

The archaeological site extends over 1,500 acres –the largest ancient city standing in Greece today– and has been proposed for inclusion in the UNESCO World Heritage List. It is a typical example of Roman infrastructure and architecture, while the architectural changes brought by Christianity are equally visible on the buildings. Most of the monuments are in good condition owing to the fact that Nikopolis is one of the few ancient cities in Greece that have not undergone further inhabitation and the building materials were not reused during the construction of new edifices in the ancient years. 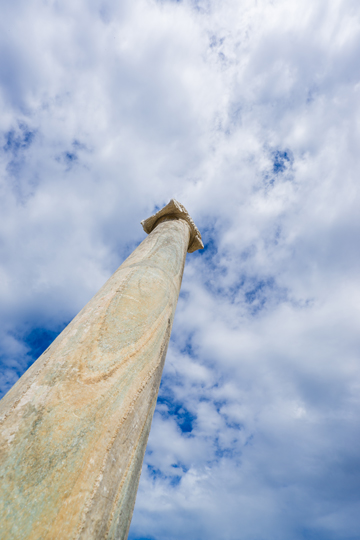 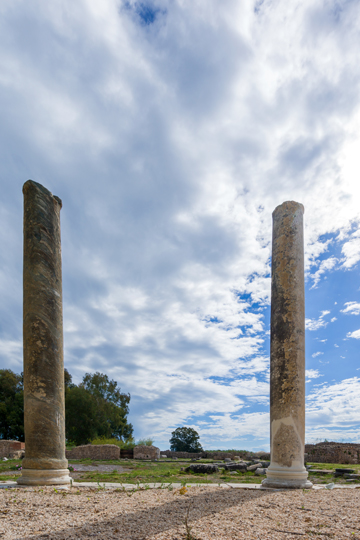 The area chosen by Octavian to glorify his victory was in several respects ideal: it was rich in water and blessed with excellent climate and access from land and sea. Many of the old cities of Epirus had been deserted more than a century earlier due to the plundering run by Aemilius Paullus. Therefore, the foundation of Nikopolis meant an unprecedented economic boost for the wider area. Inhabitants were brought over from Epirus, Aetolia-Acarnania, the island of Lefkada and other places. Nikopolis was soon to become an affluent and bustling city; during its heyday it is estimated to have had a population of over 100,000 inhabitants, engaged in agriculture, livestock farming and fishing. The significant privileges and tax exemptions granted by Octavian had a vital contribution to the city’s development. Its political significance –the fact that it received the status of civitas libera and the monuments that adorned it– lent Nikopolis exceptional glamour. Octavian’s spoils from the naval battle of Aktium and the donations of his friend and ally Herod I of Judea funded the construction of many imposing pieces of architecture. Octavian dedicated Nikopolis to Apollo and turned the ancient sanctuary of Apollo Actius of Acarnania into a majestic temple and religious centre of the city.

In 28 B.C., it was decided to celebrate the New Aktia Games on September 2, as a revival of the old Aktia Games –races and
competitions in honour of Apollo Actius. However, since the inhabitants of Nikopolis originated from several areas, other gods were also worshiped in the city, including Dionysus and Artemis, as well as deities of other traditions, like Attis, Isis and Cybele. Equally important was the worship of the Roman emperors.
Significant people had been to Nikopolis; Roman emperors such as Nero and Hadrian, generals such as Germanicus, philosophers such as Epictetus, and historians like Arrian. Wealthy Roman nobles and merchants chose to live there permanently or during the summer, in spectacular mansions. The city is believed to have been visited by Apostle Paul in 65 A.D., though there is no pertinent historical evidence.

THE ROMAN WALLS
Immediately after founding the city, Octavian secured it inside walls, leaving outside the fortification wall the Proastion (Suburb). The Proastion used to host public areas and buidings –the thea- tre, the gymnasium, the stadium, the thermal baths– which were constructed during the same time, but also the sacred grove. In the 3rd c. A.D., when German tribes started attacking the empire, the walls of Nikopolis were repaired and reinforced. In 540 A.D. the Byzantine emperor Justinian financed one more round of repairs. Of the 5 km long perimeter of the fortification, only some parts on the north and south side are maintained. There were five gates to the city; the main entrance was in the middle of the west side of the wall. Key roads ended, crossed or started from the gates to reach the harbours, sanctuaries and public buildings. 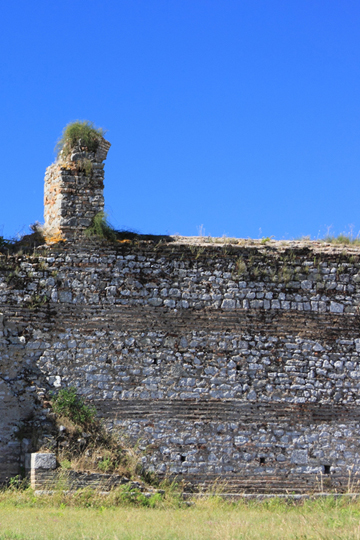 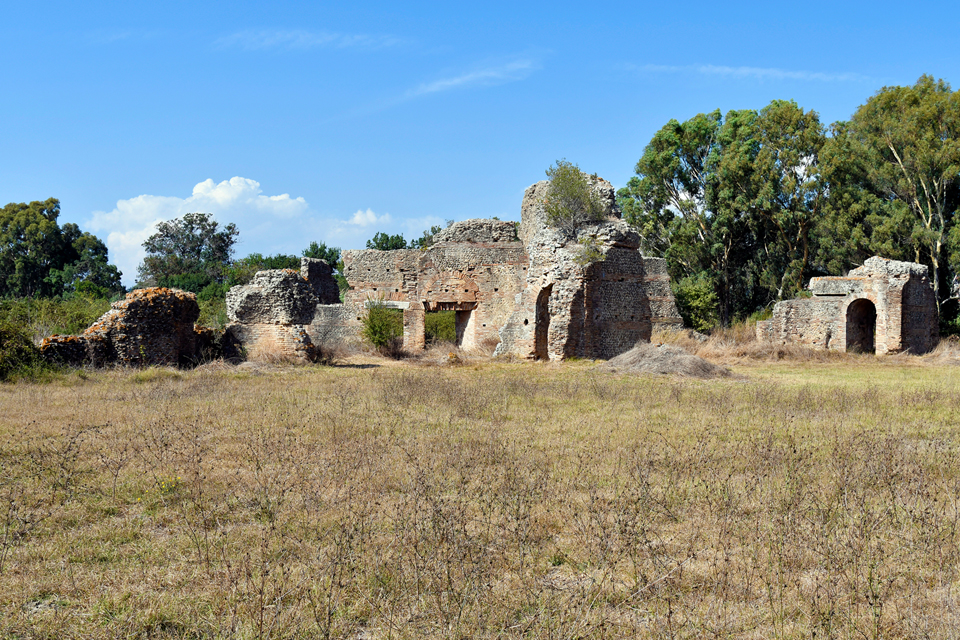 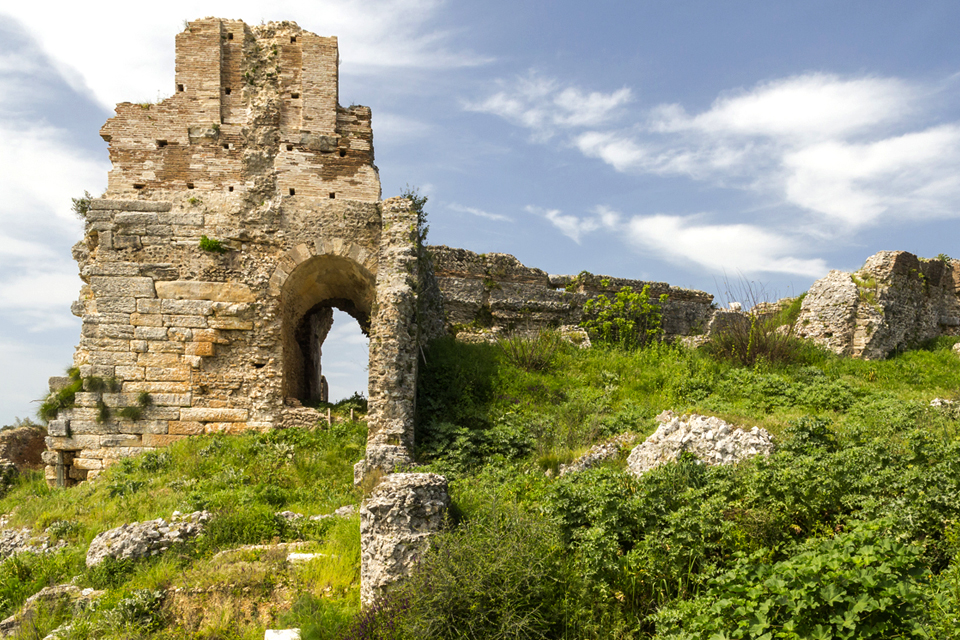 36 BRONZE RAMS (ROSTRA), TAKEN FROM THE DEFEATED FLEET OF ANTONY AND CLEOPATRA, ADORNED THE FACADE OF THE MONUMENT OF AUGUSTUS AND WERE PLACED IN ANCHORSHAPED RECESSES 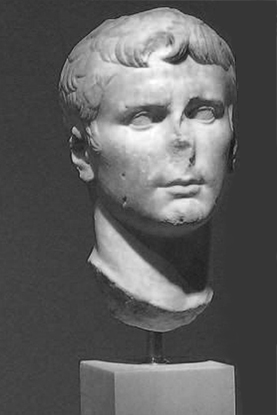 NICOPOLIS MUSEUM
THE MUSEUM IS THE ONLY ONE TO HOST FINDS FROM NIKOPOLIS, THE CITY THAT BECAME THE SYMBOL OF OCTAVIAN’S GLORIOUS VICTORY AT THE SEA BATTLE OF AKTIUM.

THE MONUMENT OF AUGUSTUS / In the Proastion stands the Victory Monument, the tropaeum of the Sea Battle of Aktium and a symbol of the new order and the emperor’s power. It was built in 28 B.C. on the top of the Mikhalitsi hill, where Octavian had camped before the battle, and where all the surviving soldiers of Antony and Cleopatra swore their allegiance. Many parts of the monument are made of durable Roman concrete (opus caementicium). Inside there was an open sanctuary dedicated to Apollo, Poseidon and Mars, the gods protectors of Octavian. The monument was constructed on a terrace and is open to the south. It stretched even further above the terrace, by way of a Π-shaped loggia. The wings of the loggia probably formed a peristyle, which held the altar and three pedestals. Parts of the altar decorations, thought to relate the triumph of Augustus, have been preserved, along with part of a large dedicatory inscription.

THE THEATRE / The impressive theatre of Nikopolis is located in the Proastion, and is kept in a satisfactory condition. It combines elements of Greek and Roman architecture and offers panoramic views of the area. It was erected in the years of Octavianus Augustus and, during the days of the New Aktia Games, it functioned as the ground of competition for musicians, poets, sophists, tragedians, comedians, preachers, mimes etc. The theatre’s cavea was reinforced to protect the building against earthquakes and the viewers used to reach their stone seats by two staircases. In the stoa at the periphery the viewers gathered in the event of a storm. The orchestra was semi-circular, just like the cavea, and the stage was elevated.

THE ODEION
Also dating back to the years of Augustus, the Odeion is one of the most well-preserved monuments of Nikopolis. It is located in the city centre next to the forum andused to host talks, races and theatrical performances during the New Aktia Games.The rest of the time it most likely hostedpolitical assemblies, acting as a parliamentary chamber. 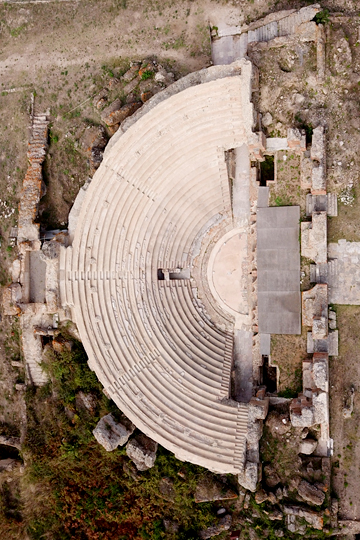 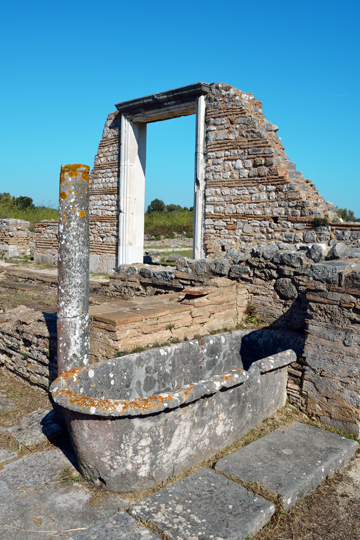 THE THERMAE
THE BATHS WERE KEPT WARM BY A CENTRAL HEATING SYSTEM, THE HYPOCAUSTUM, WHICH ENSURED THE TRANSFER OF HOT AIR THROUGH DUCTS BENEATH THE FLOORS AND INSIDE THE WALLS.

THE THERMAE / The spectacular thermae were constructed immediately after the foundation of the city and were used mainly by the athletesduring the New Aktia Games. This complex of buildings with interconnected halls and open spaces displays some of the most characteristic features of Roman architecture, such as arches, domes, apses, etc. Among other things, it also featureda swimming pool (natatio) and a number of areas that had gradual heating. The caldarium, the hot water area, was connected with the tepidarium, the warm water area. Bathers would then move on to the frigidarium, the cold water area.

THE NYMPHAEUM / Located near the western gate of the Roman walls, it consists of two brick structures facing each other at a distance of 23 metres. They provided a roof for the two large cisterns that collected the water of the Louros springs for the city’s water supply. Until recently, it was dated to the time of Augustus, but today it is believed to have been constructed much later, in the second half of the 2nd and at the beginning of the 3rd c. A.D. The façades –thought to have featured clay pipes– are simple and undecorated. Yet, the interioris adorned with rectangular and semicircular niches at a heightof 1.85 m. Marble statues with themes from the water world and nature were placed there, as they were visible to those whopassed through the western gate thanks to the low walls on thetwo open sides of the structures. 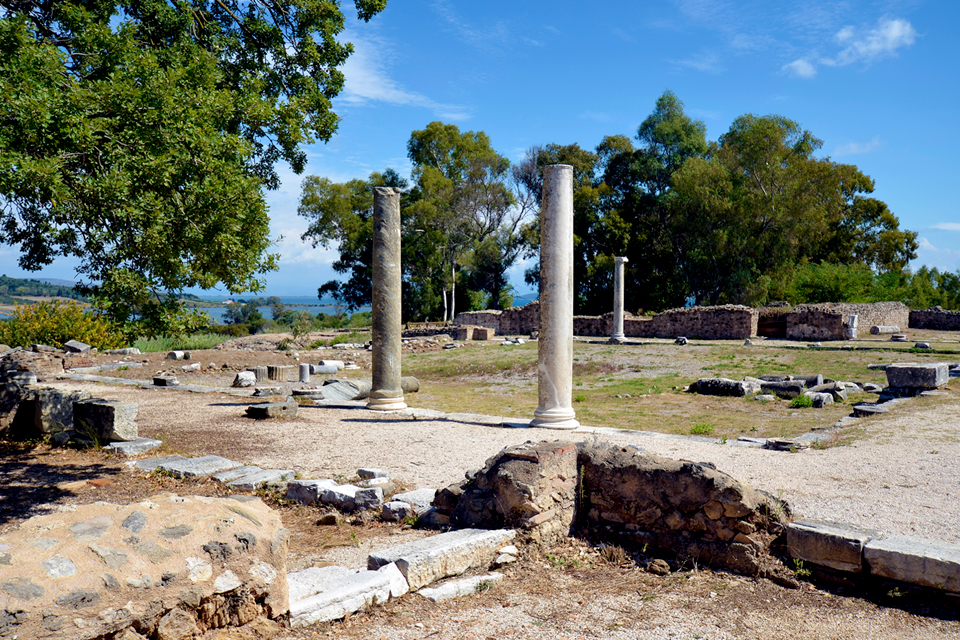 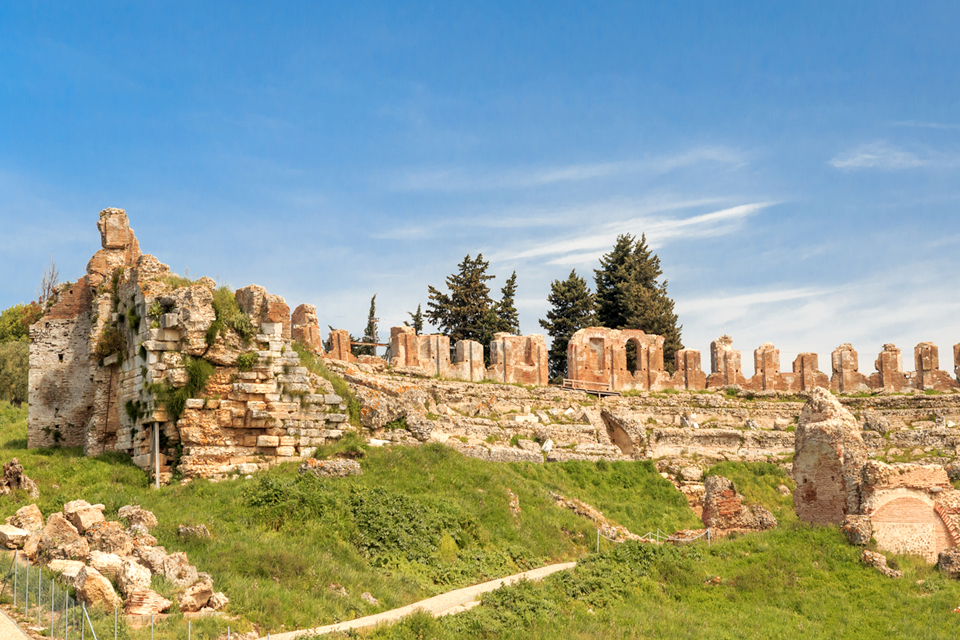 THE ARCHAEOLOGICAL SITE EXTENDS OVER 1,500 ACRES AND IS THE LARGEST ANCIENT CITY STANDING IN GREECE TODAY

THE MANSION OF MANIUS ANTONINUS / Βased on an owner’s inscription found at the premises, this luxury private mansion of the 2nd c. A.D. is believed to have belonged to a man named Manius Antoninus. Five large rooms, utility rooms, patio, kitchen, well and a cistern have been revealed. Geometric motifs and a central emblem datingback to the same era are the key elements of the mosaic flooring that decorated the first large room. Elsewhere the floor wadecorated with marble. A corridor with mosaic flooring that led to the courtyard was also revealed, but it is damaged. 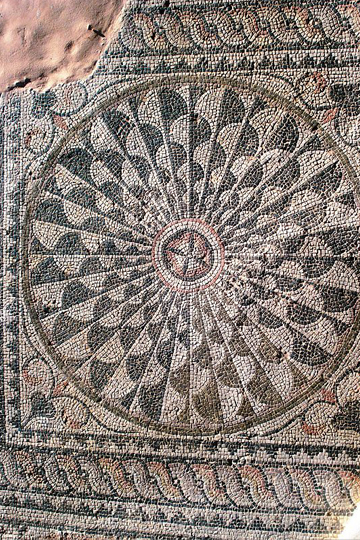 THE AQUEDUCT / The aqueduct transferred water to the city through a duct. The tunnel that was dug out for that purpose passed through mountains and over arched bridges. The water ran down fromthe springs of Louros to the nymphaeum and from there it wasdelivered to the buildings in the city. According to estimations,it was constructed after the foundation of Nikopolis, but it is also possible that it was built in the time of Emperor Hadrian (2nd c.). Emperor Julian (4th c.) undertook maintenance workand the aqueduct remained in use only until the middle of the 5th c. A.D. In recent years, several projects have helped support,bolster and bring out the beauty of the aqueduct system.

The first excavations in the area began in 1913-14, but their results were never published, while the archaeological finds were destroyed by bombings during WW II. The research was resumed during the Interwar period and excavations began in 1940. Unfortunately, they were interrupted after the outbreak of WW II. Later on, in the 1960s, major restoration works were carried out. Since 1995, important excavations, restoration and preservation works, as well as monument display projects have been carried out on an ongoing basis at several areas of the archaeological site. In 2006-2009 the Octavian Augustus Monument was excavated and displayed. In the year 2012-2013 part of the Early Christian walls was reconstructed and the theatre was thoroughly cleaned.